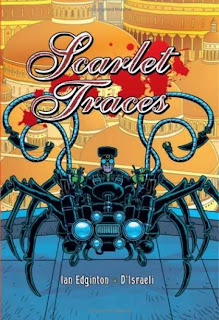 Scarlet Traces (written by Ian Edginton & illustrated by D'Israeli) takes place 10 years after the events of H.G. Well's The War of the Worlds & Martian technology exists side-by-side with Victorian era Britain. Because of reverse engineering, the British Empire covers two-thirds of the world. Hansom cabs in London now operate with robotic crab legs, & the government has the power of heat-rays on their side. Still, things aren't so sunny for the British Empire, as bodies of women start washing up in the Thames River, with blood drained from them. The public fears it may be a vampire, but adventurer Captain Robert Autumn & his manservant, Archie Currie, think otherwise & investigate the situation.

If you're a fan of steampunk, this is the graphic novel for you. For those who do not know what steampunk is, it is a subgenre of science fiction that creates an alternate history, usually in the 19th Century or Victorian Era Britain. There is an emphasis on overly mechanical, impossible steam-powered machines, & Scarlet Traces is no different.  D'Israeli has created a world where old meets the unearthly. His technological designs are intricate & require a second look, while his styling of characters, locations & events are distinct, vibrant & sometimes frightening. 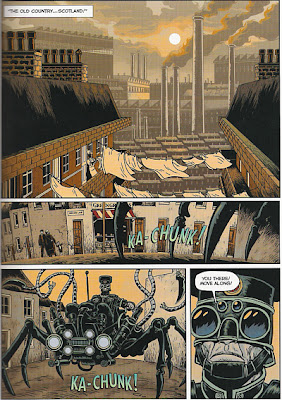 Edginton definitely cares about the source material & reuses many of the themes from W.o.t.W. Edginton's script makes a commentary about quick advancement in technology & the price of these advancements. The story makes note of the reversal for Britain. While Britain was being eliminated & colonized by Mars in W.o.t.W., in Scarlet Traces, Britain has total control over a majority of the world. Who is to say that Britain's globalization attempts will not result as it did for the Martians? Although lessons in colonization is less of an issue this day & age, Scarlet Traces is a lesson in disregarding the caution signs of history.
Posted by VandercookPressPlay at 4:33 PM