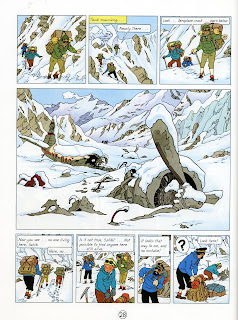 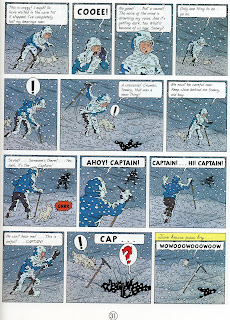 The personal history revolving around this book is interesting. Hergé was experiencing nervous breakdowns while going through a divorce from a marriage of twenty-five years & he was experiencing reoccurring dreams of nothing but white space. His therapist advised Hergé to quit the Tintin series, but Hergé sought out to finish his current story, which turned out to be therapeutic. Hergé set the story in the Himalayas to convey the lost & emptiness he feels during his dreams, making Tibet the most colorless book of the otherwise vibrant series. After he finished the book, Hergé's breakdowns lessened, he married his new wife that year, & he never experienced anymore dreams of white.
Posted by VandercookPressPlay at 10:10 AM