Graphic Novel of the Month: The Fountain 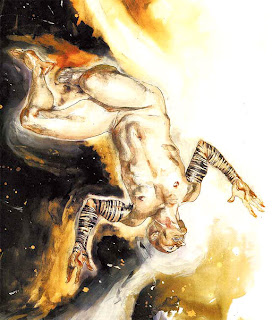 In the year 1535, Spanish Captain Tomas Verde & his soldiers are in the Americas searching for the Tree of Life. He is under the command of the Spanish queen, who has a target on her head from the Grand Inquisitor. They suspect the Tree of Life is being held a Mayan temple & are preparing to storm it. Forward to the year 2005, Dr. Thomas Creo is experimenting with new cancer treatments that involve untested plants and vegetation. Time is ticking for his miracle drug, as his wife has brain cancer. Further in the future, to the year 2463, the astronaut Tom is traveling to the nebula Xibalba. He travels in a clear sphere, accompanied by a tree and a woman who appears out of thin air time to time. Tom believes that the tree is dying & bringing it to Xibalba will cause him & the tree to live forever. 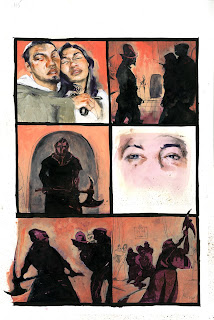 Darren Aronofsky, who wrote & directed a film of the same name, pens the novel. He originally wrote the screenplay, but when it seemed like a dead project, had the script become a graphic novel (but eventually was able to create the film.) The story is dense with themes & motifs, which includes obsession, love, trees & death. Aronofsky has left the connections between the three Toms to be created by the reader & doesn't spell everything out. All the Tom characters are distinct & well molded, but still have aspects of one another. Problems do arise from the transition of one era to another & it can be jarring to the reader.

Kent Williams paints the novel & does so beautifully. He creates an atmosphere for each time period, which helps with the time jumps. The conquistador sections contain many shades of red & gold, much like the Spanish flag; the modern scenes are grey & sterile, much like hospital; & the astronaut's scenes are colorful, bold, & otherworldly. Aronofsky let Williams' painting tell much of the story & they hold their narrative weight.
Posted by VandercookPressPlay at 2:43 PM