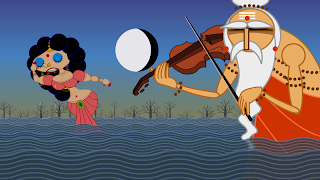 Sita Sings the Blues is an unique, entertaining, & eye-opening film about the greatest break-up story every told, the Ramayana. Created by Nina Paley with the use of 2-D computer graphics & flash animation, the film contains four parallel narratives. Episodes from the Ramayana are shown with painted figures that represent the Indian tradition of Rajput paintings. Also, three traditional Indian shadow puppets provide context & commentary for the story. During the musical episodes, songs performed by jazz singer Annette Hanshaw are conceived through the eyes of Sita. And Paley adds an autobiographical note by illustrating her failing marriage as her husband moves to India. 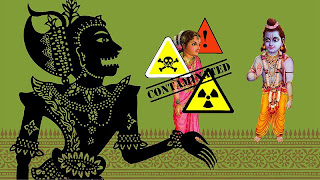 The four parallel narratives come together, each adding to the story of the Ramayana. The humor coming from the puppets will make you split your sides, & the contemporary aspects of Annette Hanshaw & Paley's own personal story fits perfectly, so much that you'd wish that you thought of it first. Paley used an unorthodox way of distribution. The film is all on-line, either on the films website or on youtube, but that shows that films aren't about movie tickets & money, its about telling a good story. Roger Eberts says of the film, "To get any film made is a miracle. To conceive of a film like this is a greater miracle."
Posted by VandercookPressPlay at 11:03 AM