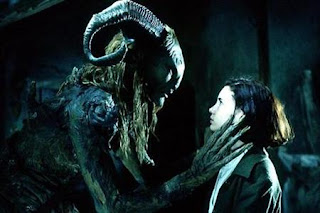 Pan's Labyrinth is a Gothic fairy tale set in the WWII Franco-controlled Spain. The story follows young Ofelia (Ivana Baquero) as she moves to the forest of Spain with her pregnant mother (Ariadna Gil) so that the baby will be born with its father, Captain Vidal (Sergi Lopez.) Captain Vidal is cruel & malicious & holds a post in the forest to delete the Spanish Maquis guerrillas. One night, Ofelia meets a fairy that draws her into an old, stone labyrinth where she meets a faun, who tells her that she is a princess reincarnate, & in order for the girl to sit on her throne in the underworld kingdom again, she must accomplish three tasks before the next full moon. Using the Book of Crossroads as her guide, she begins her quest, but, can she fully trust a faun, who are known to be tricky & mischievous, & how will the Captain interfere with Ofelia's tasks? 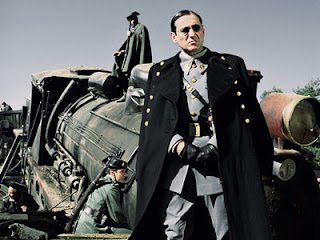 Director Guillermo del Toro was extremely inspired by the fairy tales from the Brothers Grimm & Aesop. In their tales, they were often moral lessons for children & showed the effects of obedience & disobedience. Magic was never explained; it was just there, & the fables were often gruesome. For example, in the tale of Snow White, Snow White gets her revenge on the Queen by making the Queen dance on hot, iron shoes until she drops dead. Pan's Labyrinth doesn't shy away from the gore, as the film shows that the true casualties of war are the children & that sometimes fantasy monsters aren't as bad as the real monsters in our life. This is portrayed beautifully in the film through creative art direction in the film, attractive cinematography & the young Ivana Baquero drives the film & hold it on her shoulders with great skill.
Posted by VandercookPressPlay at 11:47 AM