Two View Movie Review: The Passion of Joan of Arc 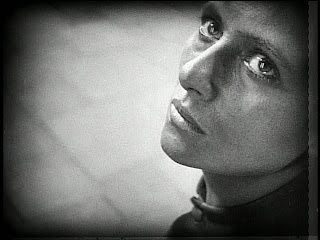 Most people know the story of the historical figure & saint Joan of Arc, but most probably aren't familiar with her trial & execution. That is the focus of Carl Theodor Dreyer's 1928 film The Passion of Joan of Arc. Joan is brought to trial because of her involvement in a couple of successful campaigns against the British during the Hundred Years' War. The Church, who were in favor of the British, held the trial. The judges try to discredit her believe that she was told by God to drive the British out of France. She often has quick, smart answers for her arbiters, such has why she wears men's clothing or how she hears the voice of God. The trial becomes grueling for both Joan & the judges, so they offer her amnesty if she declares that she is a fraud, or she will be executed.

Dreyer took some risk when he created The Passion of Joan of Arc. Silent films at the time featured mostly medium or long shots & rarely close-ups, yet Joan of Arc is made mostly of close-ups. Dreyer also had the actors wear no make-up, disabling any sort of "beautification" allowed by the camera. Also, you may notice that the mise-en-scène is very neutral to any sort of style or time period. Dreyer didn't want to make this any sort of costume-filled, period piece, thus making it a historical film that stands out on its own without any reference. 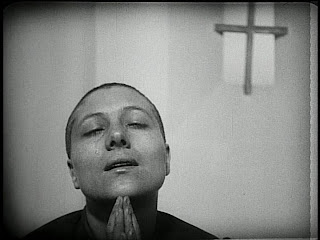 Probably the most prominent aspect of the film is Renèe Jeanne Falconetti's role as Joan. She shakes & quivers with unspeakable emotion that one has never seen before. While surrounded by her tormentors, Falconetti displays this wide-eyed gaze of fear & horror, like she's anticipating light to explode out of her eyeballs. Even during less emotional scenes, there is an underlying pain in her movements. Stories from the set reveal that Dreyer emotionally tortured Falconetti in between takes. It is also rumored that Falconetti never acted again after the film because of this reason.


The Passion of Joan of Arc has had an interesting life. The film was originally banned in Britain because of the film's depiction of British soldiers. The Archbishop of Paris also condemned the film because its depiction of the Catholic Church. Along with that, the original version was lost after a fire destroyed all the negatives of the film. Dreyer reassembled the film using outtakes & surviving prints, but it was believed that the original film was lost forever, until in 1981, a copy of the original was found in a janitor's closet at a mental institution in Oslo, Norway, which I am thankful for. Roger Ebert states, "you cannot know the history of silent film unless you know the face of Renèe Jeanne Falconetti" & I couldn't agree more.
Posted by VandercookPressPlay at 10:55 AM