Graphic Novel of the Month: Hellboy: The Chained Coffin & Other Stories

During W.W. II, the Nazis tampered with anything that would allow them to change the tide of war. One attempt included summoning a demon from hell. They were successful in summoning a demon, but it was a demon infant. The infant was intercepted by Allied forces & raised by Professor Bruttenholm & the Bureau of Paranormal Research & Defense & is named Hellboy. In The Chained Coffin & Other Stories, Hellboy travels the world solving supernatural mysteries for the B.P.R.D. as the "World's Greatest Paranormal Investigator." 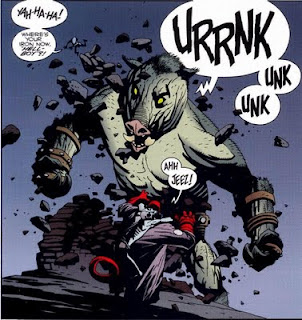 In the story The Corpse, a family needs Hellboy's help in order to get their baby back from faeries. In order to do so, Hellboy must bury the thieves' dead friend in sacred ground, but nothing is as easy as it seems. The Baba Yaga features Hellboy dealing with a Russian witch who counts dead men's fingers. In The Iron Shoes, Hellboy confronts a redcap from Border folklore who lurks in an abandoned tower. The winter special, A Christmas Underground, has Hellboy fulfilling a dying woman's final wish by rescuing her daughter from a prince of the underworld. In The Chained Coffin, Hellboy receives a vision of a nun & a priest protecting their dead mother from a demon, while learning a little about his past. The Wolves of Saint August contains a trip to a village filled with the ghosts of werewolves. The Almost Colossus story focuses on Hellboy tracking down a homunculus in order to save one of his teammates. 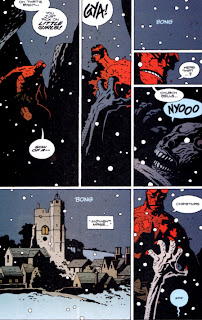 Hellboy is an interesting mix of super heroics, folklore, & horror. The stories are often humorous, weird, spine-chilling & monster packed. Mike Mignola plays with comic conventions in subtle way, such as word balloons, which may be designed according to the character's speech pattern. The most notable thing of Hellboy is Mignola's artwork, which is a mix of old-school flat coloring & German Expressionism. Mignola is also a master of shading & color, using shadows to create an eerie atmosphere. This collection features the best of Mignola's talent, most significantly The Corpse, which is probably the best comic story telling from the last 15 years, & A Christmas Underground, which is an oddly sweet holiday story that I will cherished along with my other holiday favorites, A Christmas Carol & The Gift of the Magi.
Posted by VandercookPressPlay at 3:45 PM