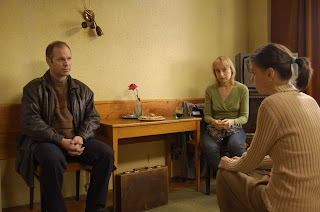 Christian Mungiu's 4 Months, 3 Weeks & 2 Days follows two college students, Otilia (Anamaria Marinca) & Gabriela (Laura Vasiliu) in a Romanian town. Set in 1987, towards the end of the Communist Ceauşescu regime, abortions are illegal & committing an abortion after 3 months of pregnancy is considered manslaughter. When Gabriela gets pregnant, she asks for Otilia's help in getting   someone to perform an abortion. They get in contact with an elusive & rightfully cagey Mr. Bebe (Vlad Ivanov,) who has clear, set instructions as to the preparations of the abortion. Gabriela manages to screw everything up & when Mr. Bebe finds out Gabriela lied about how long she's been pregnant, he demands more money, but the girls are out of money & time.

4 Months isn't a film about abortions in the sense it doesn't preach one way or the other on the topic. It's just a plot point. I would say the point of the film is to focus on faith in one's friends, as Otilia considerably risks herself many times in the film for her helpless friend (helpless in both senses of the word.) Marinca carries the emotional weight of the story & does so amazingly. Yet its Ivanov who steals every scene he is in. At first, he seems harmless, but the audience will learn that even if he doesn't shout or howl, he's a brute.

The acting is minimalist & natural, with the actors only doing what is required for each scene, a feature that is evident in all aspects of the film. Cinematographer Oleg Mutu uses a hand-camera skillfully to capture the grittiness of the time, which is helped by Mungiu's appropriate recreation of late '80's Romania. Mungiu uses limited editing & long takes, which builds suspense. My favorite scene, which is a seven minute long take with eight actors, is when Otilia is visiting her boyfriend at his parents' house during a dinner party. Obliged to join in the dinner, Otilia faces persecution for being both young & from a rural area by the parents & their friends. The long take allows the viewer to notice Otilia getting irritated from the judgement & the events going on outside the scene, too.

I've read descriptions of the film, with some calling it a thriller or a horror movie. Mungiu does offer hints in the movie as to what may or may not happen, which does create an atmosphere of dread, but I wouldn't put it in either of those categories. 4 Months is more subtle, more graceful, & in a way, more gut-wrenching.
Posted by VandercookPressPlay at 11:46 AM