If you're a fan of the JCBA, then you probably know John Cutrone. Cutrone has been a part of the JCBA for some time, teaching classes, giving presentations, creating exhibits & sending out emails. He's the voice of the JCBA (besides myself) & this year, he's been appointed director of the JCBA, so I thought that I would have a little chat with Mr. Cutrone on what's in store for the JCBA.
First off, what does the JCBA mean to you?
Well, I think of it as a great experiment. JCBA is still very much in its infancy & we are most definitely still wending our way, trying to find our place. I think as Seth & Arthur & I have developed the place, we knew very much from the start what we did not want to be & so we've always built from that. We did not want it to be unapproachable. We did not want the books locked in a cage. 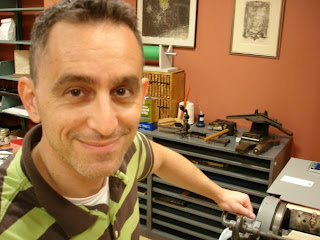 Moving beyond that has been this very interesting process of deciphering what JCBA can be. We know we have a lot to do if we are to get to the point where we can offer all the educational opportunities we hope to. This involves acquiring more metal & wood type for the Letterpress Studio, as well as another Vandercook press & it involves acquiring more special tools for the Book Studio & even though the Paper Studio is not yet open, we know there is more necessary equipment to acquire there, as well, if JCBA is to be a viable working research facility in the book arts.
We have many book arts centers across the country to look up to & aspire to, but we are aware that we have a clean slate to work from. For instance, we have the very awesome Book Arts Gallery & so we have learned to use what we have in creative ways. I don't think Jane Siberry has performed salon concerts at many other book arts centers, for instance. But, I have always thought of JCBA as not just a book arts center, but as a center for creativity in general, a place where ideas are exchanged, be it through books or music or film or performance or whatever anyone wants to bring to our table.
What hamster wheels are turning in your head regarding future events & exhibits?
We've got a few really exciting exhibitions in the works, all of which have only working titles right now... so the titles may change as the exhibition research progresses. In the spring of 2012, watch for Motor City, which we are presenting as part of FAU's 50th anniversary festivities. This university began as an experiment in non-traditional education & part of that was a campus focused on commuter students (a fact that has changed only in the last decade.) Motor City will feature artists' books that deal with cars, maps, bridges, roads, & other motoring ideas & will also include a one-day antique automobile show at the new FAU stadium in March & perhaps a film series, too.


After that, we'll be unveiling the new Arthur J. Williams Pop-Up Book Collection, a recent gift to JCBA's permanent collection. The working title is POP! & it will be exciting & dynamic, because really good pop-up books can't help being anything but exciting & dynamic. This exhibition will certainly include some workshops in paper engineering & hopefully a gallery talk or two with some great paper engineers. 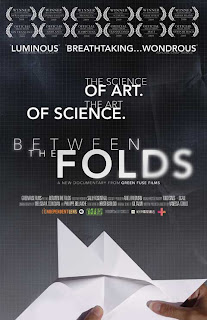 I'm already at work researching our exhibition for Autumn 2012, which explores the connections between paper folding, science, math, engineering & creativity. This exhibition, which I am particularly excited about, is inspired by the Green Fuse film Between the Folds, which looks at the traditional paper folding art of origami & how, in the hands of offbeat thinkers, origami is reshaping ideas on creativity & the relationship between art & science. Paper folding workshops & screening of the film are natural events to link this exhibition.
Other upcoming events include our annual print shop open house in celebration of Letterpress Appreciation Day (September 18) & the opening of JCBA's new Handpapermaking Studio some time this fall. Also, what might be our best fundraiser ever, involves pie, because there's nothing better than pie & coffee & a good book. The Elephant House, or the Home of Edward Gorey exhibition that we put up in the fall of 2009 will be at FAU's MacArthur Campus Library at the end of August. I'd like to do something with ghost stories, too, around Halloween...but we shall see about that.
A more personal, second part of the interview will be coming soon, so look out for that.
Posted by VandercookPressPlay at 3:22 PM