Graphic Novel of the Month: City of Glass 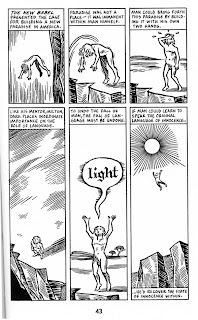 "It was a wrong number that started it all..." which is the line that starts City of Glass. In the graphic novel adaptation of Paul Auster's book of the same name, mystery writer Daniel Quinn gets a puzzling phone call asking for detective Paul Auster. After many nights for the same request, Quinn decides to play along & gets a case from Peter Stillman, a mentally abused man-child, & Stillman's wife & speech therapist, Victoria. They tell him that Stillman was locked in a dark closet for years by his father, Peter Stillman Sr., a professor who was seeking out the original language before the fall of man in the Garden of Eden. After serving time for child abuse, Peter Stillman Sr. is being released & the couple is worried that he may show up to get revenge, so they pay Auster (Quinn) to follow Stillman. 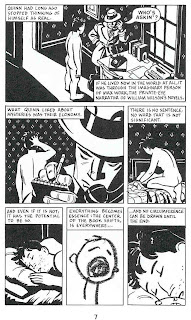 That is the overall narrative structure of the novel, but this is more than just a detective story. There is much to say about this novel & I wrote out five paragraphs of analysis with more on my mind, but I deleted it all. It's just too heavy of a novel to be discussed in a couple of statements. There are assertions & contradictions in the novel about identity, authorship, & semiotics, along with many visual themes & motifs. If I were to teach a class on comic theory (which may or may not be a class anywhere, sadly) I would have this as part of my required reading. I also didn't realize this, but City of Glass perfectly pairs up with last months G.N.o.t.M., Understanding Comics. I would recommend reading that one first, and then hit City of Glass. It will help you with the match shots & panel transitions that are fill the pages, making City of Glass quite cerebral & technical.


To put it into perspective as too how much effort was put into this novel, it took four people to adapt it from a written novel to a graphic novel. Paul Karasik wrote the script, David Mazzucchelli drew it, Paul Auster supervised the adaption & Art Spieglman organized it. I haven't read the original, but as a work on its own, it is something of a revelation.
Posted by VandercookPressPlay at 10:10 AM