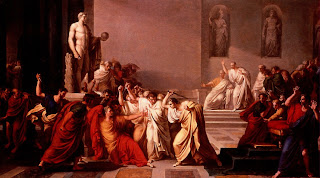 It's an interesting story of murder, treachery, & rebellion. To celebrate it, I suggest watching a particularly stabby movie, like Psycho, or you can tape a paper dagger on someone's back, like what happened this year to JCBA student assistant, Jonas McCaffery. Hopefully, if it happens to you, you'll find it sooner than three hours later.
Posted by VandercookPressPlay at 10:06 AM