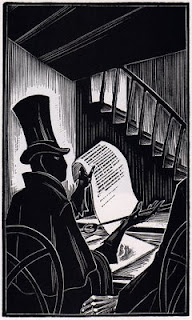 Check out Judith Klau's analysis of the book here.
Posted by VandercookPressPlay at 11:07 AM