Graphic Novel of the Month: Little Nemo in Slumberland 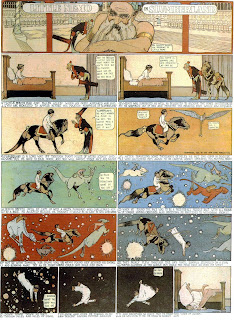 The King of Slumberland, Morpheus, invited six year-old Nemo to be a playmate for his daughter, the Princess. Slumberland can only be gained when Nemo is sleeping, so every night, King Morpheus & his attendants find ways to get him to the kingdom, but Nemo's dreams quickly turns into nightmares & he wakes up, usually falling out of his bed. He gets woken up right before some sort of serious injury, like falling off a flying horse or being crushed by giant mushrooms, or by running into Flip, the mischievous son of the Sun & nephew of Dawn. Flip is competing with Nemo for the Princesses attention, despite being an outcast in Slumberland. Every time Nemo sees Flip's "Wake Up" hat, he wakes up. Nemo does make his way to Slumberland, but he gets lost in the Palace. In the Palace, reality isn't a factor & every room is a new funhouse, with the rules of physic being forgotten.

Winsor McCay created Little Nemo in Slumberland in 1905. It first appeared in the New York Herald every Sunday, and then moved over to New York American where the strip changed its name to In the Land of Wonderful Dreams. McCay definitely has the creativity & the skill to pull off the surreal. He drew some of the most imaginative images ever in comics, at a time when the comic strip was still in its infancy. These creative images are so striking because McCay's artwork contains clean lines & flat coloring that caused the large & highly detailed backgrounds & weird characters to stand out from the rest of the other comic strips. A strip titled "Night of the Living Houses," where Nemo gets attacked by walking houses, was the first comic strip to be entered into the Louvre. 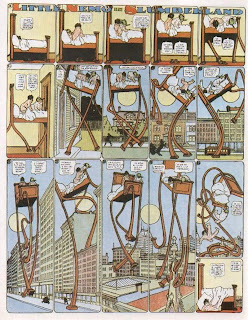 Readers will have to overlook the racially influenced caricature of the Imp, whose face resembles minstrel show make-up. Fans of the strip state that the Imp is treated positively & is not shown any form of humiliation throughout the tales. Also, McCay followed the method of "draw first, write later" causing the text to be sometimes squeezed in the bubbles & in the gutters of the panels. Fortunately, McCay sometimes numbers his text, so the reader knows where to go.


Nemo has been reprinted many times, but it is best seen in the So Many Splendid Sundays! edition, as the comic is shown in its original scale & is an impressive display of the illustrations.
Posted by VandercookPressPlay at 10:52 AM