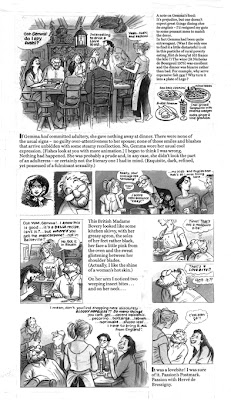 Posy Simmonds writes and draws the fall & rise & fall again of a British woman living in the French countryside. The story is told after the title character's death through the eyes of a local baker who has followed Gemma and stolen her diaries, allowing him to connect the dots. In it, we discover that Gemma was a dumpy & generally unhappy woman. She hated her house, she hated the countryside, and she hated her husband, Charles Bovery. After going on a spending spree for a new wardrobe and losing weight, the bored Gemma starts a love affair with a young student in town, but fails to think of the consequences that may follow. Simmonds has created something more than just a modern retelling of Gustave Flaubert's Madame Bovary. Instead, she has detailed the annoying & sometimes humorous behavior of the well-off and inflated middle-class.
Posted by VandercookPressPlay at 3:34 PM No comments:

Welcome to the Book Blog 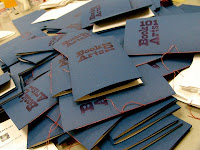 Welcome, family, friends, and fans to the JCBA blog! This is a new source of JCBA fun for all you book junkies out there that will allow you to delve deeper in the center. The blog will feature news about JCBA and the book arts world, post information on upcoming events, and feature pictures and videos from the events. All of this is similar to our page on Facebook, which is an important tool for all of our JCBA affairs, but this little blog will feature in-depth displays and discussions of artists' books, a Two View Movie Review featurette, a Graphic Novel Pick of the Month, and more!


Being JCBA's type sorter, I'm more than happy to be given the job of the official blogger, but I'm also a little nervous. I have never kept a blog before, so cut me some slack on the technical stuff. I'm looking at it, and working through it. Also, if there is anything that you would like to see featured, leave a comment below any of the posts. I will most certainly read them and take them into consideration. I hope you enjoy this blog as much as I know I will enjoy writing it!

Posted by VandercookPressPlay at 2:12 PM No comments: