Last week, the 2012 Oscar Nominations were released, with Martin Scorsese's Hugo winning 11 nominations & Michel Hazanavicius's The Artist with a close 10. It's interesting that these two have the most nominations, because these two are similar in themes. Many reviewers have said of both films that they are love letters to cinema, but isn't every film a love letter to cinema (as one reviewer said that Fast Five was a love letter to film). Even so, here is my short love letter to the films of 2011 that I found significant. 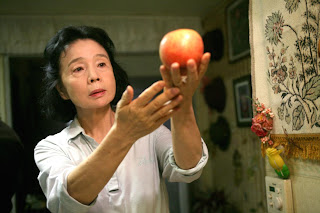 5. Poetry- Directed, produced, & written by Lee Chang-dong, Poetry follows Yang Mija (Yoon Jeong-hee), a grandmother who is searching for the beauty in life. Mija found out that she has Alzheimer's disease & her mental condition is expected to get much worse. On top of that, her grandson & his friends raped a schoolmate, which lead to her suicide. In order for the victim's family to keep quiet, the boys' parent must pay them off & money is something Mija doesn't have. Still, the poetry class she is taking causes Mija to look at the world differently & inspires her. Jeong-hee gives one of the best performances of the year in this film, which makes unexpected yet quiet turns in this sad & elegant film. 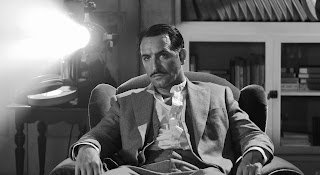 4. The Artist- This film has been making quite a stir because it is a modern-day silent film, but it is not just a gimmick. Director & writer Michel Hazanavicious wanted to transport the audience back to the day when silent films were dying & talkies started popping up. He does it with a story about a silent film star (Jean Dujardin) who loses everything when he isn't able to transition to the new Hollywood films. The film is charming, romantic & proves the old cliché that "silent films were never silent" & silent films aren't really dead. 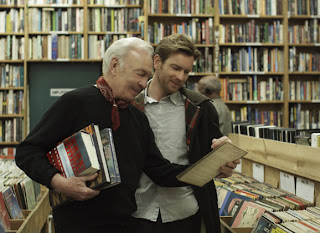 3. Beginners- Inspired by his father, Mike Mills created a bittersweet film about an artist, Hal (Ewan McGregor), whose father, at the age of 85, declares that he is gay. Hal starts a relationship with a French actress (Mélanie Laurent), but their past relationships & the relationship of both their parents cause uneasiness with the new couple. The film is assembled with many interconnecting flashbacks that give greater depth to characters who are searching for what we're all looking for in life: happiness. 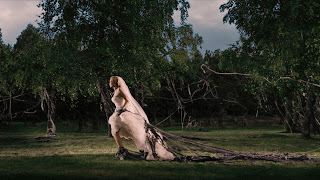 2. Melancholia- In this apocalyptic film, a Justine (Kirsten Dunst) is miserable on what is supposed to be the happiest day of her life. Her wedding turns out to be a complete failure thanks to family tensions & the bride's depression. Also, a rogue planet, Melancholia, is heading directly to Earth, threatening to destroy everything. Anyone who has seen a Lars Von Tier film knows that they are emotional, uncomfortable, & unique & this may be the clearest vision I have seen from the Danish filmmaker. It is a depressing film, but that's what you get from a film that is an allegory of depression. 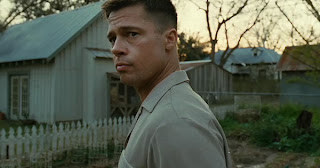 1. Tree of Life- Tree of Life may be one of the most controversial films this last year, not because of its content, but because of its form. Sean Penn, who had a supporting role in the movie even said, "The screenplay is the most magnificent one that I've ever read but I couldn't find that emotion on the screen." What he's talking about is the film's jump cuts, the arbitrary lines spoken over astronomical visions & the soft plot center, which is what I loved about the film. It follows a boy, Jack (Hunter McCracken), who has a complicated relationship with his father (Brad Pitt). We view a year in the life of Jack & his family living in Texas during the 50's, yet we are also met with a 17-minute, creation of Earth sequence & juxtaposed together, we get a spiritual journey that is reminiscent of 8½ & 2001. I viewed Tree of Life as visual poetry that is meditative, epic, & enlightening.
Posted by VandercookPressPlay at 1:50 PM No comments:

Graphic Novel of the Month: Signal to Noise 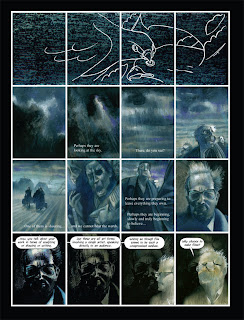 Signal to Noise tells the story of a nameless film director who is dying of cancer. Struggling with the idea that he only has a couple of months left, the director debates over writing his final script; the script & the film that he has been wanting to make for years. He storyboards the magnum opus in his head & eventually writes the film, knowing that he won't see the finished product. In the end, he states that he feels better, not because his cancer has remitted, but because he came to terms with his immortality, because "the world is always ending for someone."


Neil Gaimen wrote Signal to Noise & the artwork was by Gaiman's frequent collaborator, Dave McKean. The novel doesn't really have a clear plot center; the story often goes in & out of the director's head as he plans out the film, which is about villagers in the year 999 a.d. who think that the world will end at the start of the new millennium. The narrative juxtaposes conversations the director has with those closest to him along with the narrative of the screenplay. 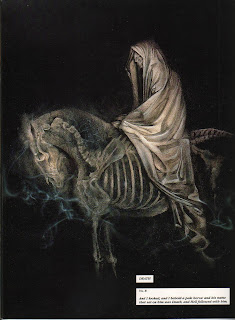 McKean's artwork is something to behold in this work. It is often a collage of painting, drawing, photographs & digital art & contains many visual metaphors that go along with the narrative. McKean, for the most part, keeps the panels, which breaks up the images. Each page is its own artwork, but the panels become a piece on their own.

Signal to Noise is heady, cerebral, & expressive. I think it is flawed of me to call it a narrative, but rather a reading of an emotion. It shouldn't be viewed as a graphic novel, but as graphic poetry, where you read it & consider the works possibilities.
Posted by VandercookPressPlay at 3:12 PM No comments:

The Origami Art of Brian Chan

I've discovered some fascinating origami figures from artist Brian Chan. These realistic insects shown below are all from one sheet of paper. Also, later this year, we're planning on having a origami exhibit involving origami from various artist & incorporating them with books from the JCBA, so start looking forward to that.
Posted by VandercookPressPlay at 10:39 AM No comments:

The Ink Dial by Terrence Chouinard

I'm looking for some help, fellow JCBA fans. Terrence Chouinard is hoping to make an Ink Dial, a machine that will disperse ink for printers. No more eyeballing, guessing, or weighing when mixing & trying to get the color ink that you want. It would be a great invention for all our letterpress printers & book artists, but Chouinard is having trouble raising money for the machine. His goal of $35,000 is coming up next week, & he has less than $10,000. If you donate $35, you'll help out with this great project & you'll get a letterpress print out of it, too. Not to shabby.

The Ink Dial
Posted by VandercookPressPlay at 2:03 PM No comments: