Crumpling a Thin Sheet (2007) is Rutherford Witthus' scientific publication paying homage to John Cage, who practiced chance-determination as a part of his art. Witthus was infatuated by a piece of paper that he crumpled up and threw away. After studying the paper and its crumples, Witthus went on to explore the crumples of various types of papers, and found that every paper and crumple had their own distinct, special quality.

Witthus went on to photograph his crumpled creations and meticulously wrote down their construction. "Crumple 19. Crumpled for 20 seconds on 22 June 2007 at 09:43:02 AM." Witthus even goes so far to document Crumple 19's internal construction by bisecting and dissecting the paper. Witthus continues with his scientific investigation by reprinting a 2001 study by a group of physicists from the University of Chicago titled Crumpling a Thin Sheet. The group was composed of research assistants Rachel B. Wiliams and Kittiwit Matan, Dr. Thomas A. Witten, and Dr. Sidney R. Nagel. Dr. Nagel gets inspiration to take unusual studies because "many complex phenomena are so familiar that we hardly realize that they defy our normal intuition; we forget to ask whether or not they are understood." The study goes on to focus on how the sheet gets its strength and its size depending on the force that is applied to it.

Of course, this is all Greek to me, but what stands out about the text is how Witthus highlights the text and enlarges it, sometimes overlapping the other text. These are statements that stand out to him that he found particularly interesting, for example, "sheets of different size were also used with no obvious change in result," or statements that gave the personified the sheets, like "relaxation continues to even if the compression is stopped." It's these changes in the words' sizes, font, and color, and Witthus' attractive black-and-white photographs, make this an aesthetically interesting book that will appeal to both artistic and scientific persuasions.

The book is housed in a wooden box with a photograph of Witthus crumpling a sheet. It is bound in a traditional sewn binding using twisted paper as support, which is a genius way of incorporating crumpled paper in the binding. It was printed on velin arches blanc paper using an Epson Stylus Pro 4000. There are 11 copies that were up for sale, 4 presentation copies, and the Jaffe Center has copy #6.


Posted by VandercookPressPlay at 1:19 PM No comments: 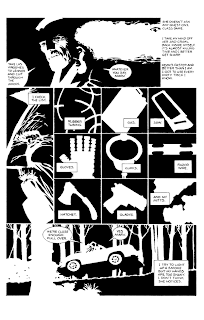 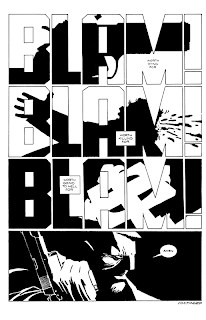 Still, this is no The Maltese Falcon. Marv is perfect example of an anti-hero & his actions are absurd, which is why he may be Miller's greatest character to come out of the Sin City series. He is a savage, stubborn & easily angered & is a product of his urban environment. So, if you don't Marv, then you must not like the city.
Posted by VandercookPressPlay at 2:28 PM No comments: