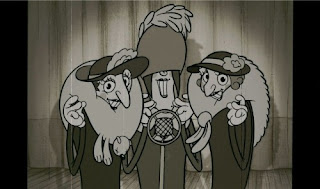 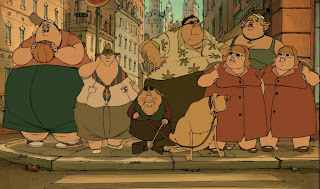 Chomet's film is highly artful & creative & he combined drawing & computer-imagery to created the very distinct & fluid nature of the characters. All the characters have their own physically tendencies & movements in which we get the characters' personalities from, since this is a dialogue free film. The characters talk in squeaks & squawks that are indiscernible, making this a universal film special for this global economy. That may be why it has become such a cult favorite. Anyone can pick it up & enjoy it. The film pokes fun of the French, by overly emphasizing their love of the Tour de France & frog legs, & America, by displaying the populous as being fat & loving hamburgers. It is also a worldwide hit probably because the film is funny, touching, & features some really great, stand-up-&-boogie music.
Posted by VandercookPressPlay at 11:45 PM No comments:

Center Paige: Direction of the Road 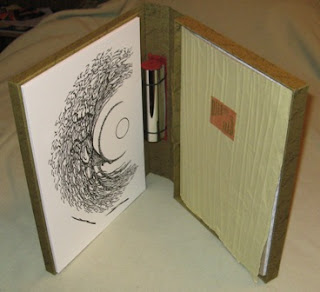 Direction of the Road is a favorite among JCBA fans & employees. Science fiction & fantasy writer Ursula Le Guin wrote the story & artist Aaron Johnson constructed the book, box & images. The book is made out of over-beaten homemade linen paper & bound together in a long stitch. The text is letterpress printed & paper leave are pasted on every page. The book is held in a portfolio box & on the inside of the box's cover is a woodcut image. On the inside of the spine of the box is a tube covered with reflective polymer.

The story follows the life of an oak tree that lives in a field by a road. It has solitary life by the road with the exception of the occasional squirrel or bird. The tree also has a job to fulfill. It must grow larger as things get closer to it & smaller as things get further away. The tree can even grow larger on one side & smaller on the other as things travel down the road & the tree can do it in its sleep. The tree gets use to people traveling on horses & wagons, but soon notices loud, horseless wagons more & more. One of these high-speed cars caused the oak to leap in front of the car, causing the tree to make the decision to kill the driver. The tree was not happy about the mortal decision it had to make, but the driver didn't follow the North-South rules of the road. The tree had to kill him, but it is not a job that oaks are made for.

The whole story not only takes an interesting perspective, that of a tree, but also the way the tree sees the world is interesting. The tree sees itself the way we would see a tree. The tree grows bigger & smaller, or the tree moves slowly or at sixty miles per hour, depending on your ride. We also see the changes in the tree's world that come from changes in ours. The air smells, birds that travel to the tree lessen, & the tree gains new jobs. It not only has to provide shade to travelers, homes to animals, but also kill those who don't follow the rules. 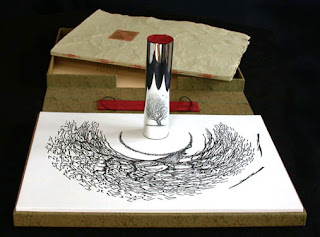 Aaron Johnson took the story's unique POV & incorporated it with book. For one, the over-beaten pages make a rustling noise, much like that of leaves blowing in the wind. The leaves pasted on the pages turn green to brown as the story goes on, conveying life transitioning to death. But the most surprising & creative aspect of the book is the woodcut inside the box, which looks like a warped image of indistinct lines surrounding a circle. If you place the reflective tube on the circle, you realize that the woodcut is actually a warped image of a tree that has to be viewed on the tube & details like birds & a man sitting under the tree become clear. It is an anamorphic image, anamorphic meaning "to transform" in Greek, & is an art form first experimented with by Leonardo di Vinci.


Everything about Direction of the Road, from the box to the story to the art to the paper, is to convey & reiterate Le Guin & Johnson's themes. That is why is a favorite here at the center & new audience members always get a kick out of this book.
Posted by VandercookPressPlay at 12:32 PM No comments:

Graphic Novel of the Month: In the Shadow of No Towers

"Waiting for that other shoe to drop!" That is the theme for Art Spiegelman's first page of In the Shadow of No Towers & ultimately the theme of the whole book, which is Spiegelman's graphic essay about the anxiety & paranoia that came about after the 9/11 attacks on the Two Towers.  When open, the book is too be read length-wise & is newspaper sized. The 10-page book starts from Spiegelman's thoughts on the attacks to the coming year filled with odd politics & fear-mongering. Spiegelman claimed he created the book to get over his post-traumatic stress disorder caused by being in New York City during that tragic time.

The pages contain many of the characters from Spiegelman's other books & he will often randomly turn into a mouse, much like his highly popular & highly acclaimed book Maus. The glowing, ghostly frames of the towers are incorporated throughout the book. At the end of the book is a number of old comic strips that Spiegleman helped get him through creating the book, including The Yellow Kid & Little Nemo in Slumberland. In the Shadow of No Towers is a fine example of an artist working through his inner & outer demons.
Posted by VandercookPressPlay at 12:48 PM No comments:

I found this short animation clip of Little Nemo in Slumberland by Windsor McCay. The fluidity of the movements is incredible & it notes McCay's amazing detail to lines & transitions. This was made in 1910, which happens to be 18 years before Walt Disney's Steamboat Willie, if that helps put it in perspective. Animation has came a long way, but this is still pretty impressive.

Posted by VandercookPressPlay at 3:43 PM No comments:

I went to see Hugo this weekend (great film, by the way) & I was set on not watching that movie in 3-D, which was hard because the only movie theater within a 15 mile radius had only two showings of the "2-D" version on Saturday. Every other theater had the 3-D version of the film, which I will not support & here are my reasons why.

For me, the 3-D image doesn't add anything to my movie experience. If anything, it takes away from it. I feel less immersed in the cinematic world because I'm aware that I'm in a theater. The best part about a film is getting sucked in, but with digital images flying at my face & pictures that look like I'm looking through a tunnel book, I fully aware that I'm in a moldy theater seat. For them to be called 3-D films & 2-D films is faulty. Films have always been in three dimensions. They've always contained depth & texture & we were watching movies just fine before 3-D came along.


There is something to be said about the flatness of the screen. It allows us to view the depth of the real world, but the picture's flatness allows us to get more involved in the narration, otherwise, it would be like seeing a play, where you're more aware of the reality of the real world. Psychologist Hugo Münsterberg wrote in 1916 about the pros of film's flatness. "We want to keep the interest in the plastic world & want to be aware of the depth in which the persons move, but our direct object of perception must be without the depth. That idea of space which forces on us most strongly the idea of heaviness, solidity & substantiality must be replaced by the light flitting immateriality." This flatness is a plus, not something that needs to change.

Also, I don't like they way it alters the picture. The projectors for 3-D movies have to be dimmer for 3-D projectors & changing a 3-D projector to a 2-D projector requires a specialist to come to the theater, which cost thousands of dollars, so the theaters just keep them at their 3-D setting, making all films dimmer. Remember the time when the film could light up everyone's face in the theater, now it's a glow. Check it out next time you're at the movies.

Also, it's just another way for the studios to get extra money out of you, particularly if they're cheaply made 3-D films or animated films. Films like Avator or Hugo were shot with a 3-D camera that is highly technical & thus, highly expensive, making the hiked price a little understandable, but only a little. But for old 3-D films & newer films like Clash of the Titans, the film is sent overseas to digitally cut the film and layer it. That's why those films look like a science project diorama. You're paying for a poor product. As for animated movies, all they have to do is change a code, which is why all the animated blockbusters now are in 3-D, because it cost no extra money to make them that way.

You can keep on going to 3-D movies & I won't judge you, just do some research before you see a film & decide if the extra cash is worth it. But I will say this, if you badly need physical reality for your stories, go to a play & if you really want motion-sickness & objects flying at your face, go on a roller coaster.
Posted by VandercookPressPlay at 2:59 PM 1 comment: