The Graphix exhibit will be ending soon & next week, we're having a blow out. On Monday, January 31st, at 7:00 pm in the Jaffe Center, English Professor Eric Berlatsky & JCBA student assistants Jonas McCaffery & Ashley Miller will hold a panel for an informal discussion on graphic novels. Each will bring their own personal expertise to the table to bring up issues & insight on the comic book medium. Prof. Berlatsky teaches the occasional graphic novel class at FAU, Ms. Miller has 10 years of cartooning experience & Mr. McCaffery was the curator of the Graphix exhibit. So, bring your thoughts & questions to the event to help create a lively conversation or you can post your own discussion questions on the blog & we'll make sure that they are brought up. 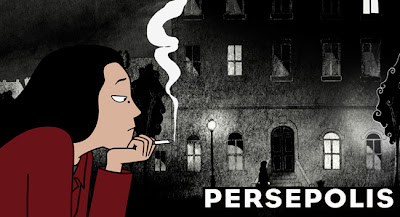 On Wednesday & Thursday, February 2nd & 3rd, at 3 pm & 7 pm, we will be screening Persepolis, a film by Marjane Satrapi & Vincent Paronnaud. The Golden Globe winning film for Best Foreign Film will be the perfect going out piece for anyone who loves movies, comic books or animation (so, almost everyone.) The film is 95 minutes long & is in French with English subtitles. To read more about the film, click on the link for my Two View Movie Review of the film . Come experience this enthralling, powerful & effective gem.
Posted by VandercookPressPlay at 9:22 AM No comments:

This will be a segment titled "Shut Up, Paige Turner," where I give commentary & criticism on whatever topic I feel like I have "something to say" about. In this post, I will be discussing superhero costumes. I wanted to write about this after re-watching "The Incredibles" & I realized that movie made good use of discussing superhero outfits with their creation of Edna Mode, fashion designer for superheroes. But, most superheroes don't have a designer or someone to sew their outfits, meaning that just about every superhero should be a contestant for Project Runway. If you think about it, Peter Parker doesn't ever have to worry about a job; he could easily get a job working for Ralph Lauren or Diane Von Furstenberg.
Also, it's good for superheroes to have a symbol. People feel safe when they see Superman's cape & criminals cower in fear at the sight of the Batman insignia. But having something so specialized means that its really precious & getting a cut, rip, or hole means hours at the sewing machine & I don't think superheroes really have hours in their day. Unless you're Bruce Wayne, you have to work 40 hours a week, fight crime at night, carry on a secret identity & you got shot at by some muggers the night before, so that means hours repairing the bullet holes in your outfit. Then you have to buy materials, go to the fabric store & hope that they have your color in. It may not be as cool, but I think it would be easier to fight crime in jeans & a t-shirt.
Having more than one set of a costume is probably necessary, too. Running around all night, a hero will probably get sweaty & the costume will probably get a little funky. Something never mentioned in any of the X-Men films.
Posted by VandercookPressPlay at 11:36 AM 2 comments:

Email ThisBlogThis!Share to TwitterShare to FacebookShare to Pinterest
Labels: Shut Up Paige Turner

The Life of a Book Artist

The life of a book artist may not seem that interesting. Some may think that its a tedious profession. The letterpress printing appears to be repetitious & the fumes may be nauseating. Binding the book requires a lot of sewing & strained fingers. And don't forget the paper making. A truly messy job if there ever was one. Still you'd be surprised; book arts is exhilarating! Check out this video just to see what I mean.

Angela Lorenz's Soap Story reads like a fairy tale (or soap opera.) It takes place in the 1950's in Calabria, Italy, where Donna Teresa, a woman with her own private washing area, confronts a young woman who is using her canal, only to find out that the woman is a struggling, single mother, whose luck is about to change. Lorenz claims that the tale is a true story told to her by the granddaughter of Donna Teresa. 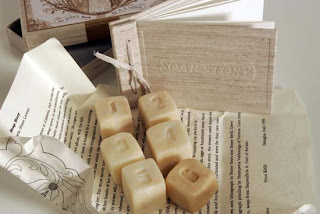 Lorenz has created a piece of work that requires a lot of interaction from the audience. When the book is originally purchased, you receive a boxed, empty six paged album & six bars of soap. Do you see where this is heading? In order to get the pages, you must use each bar where the silk-screened linen pages reside. They must be dried out & placed in the numbered page that was stamped on the soap. So you have to ask yourself: do I keep the bars of soap or finish the book? Luckily, here at the Jaffe Center, we were able to get a finished copy of the book & the six bars of soap.

Lorenz must have been inspired by Willy Wonka & takes here book a step further. She utilizes the power of special edition & has a "golden ticket" hidden in one of the bars of soap. The receiver of the ticket wins a trip to Italy. Unfortunately, Lorenz has reported that no one has came forward, but she held a lottery for the prize & the curator of the special collection at Brown University's John Hay Library won the trip. Still, you never know; JCBA may have that special ticket hidden in one of our six bars of soap. 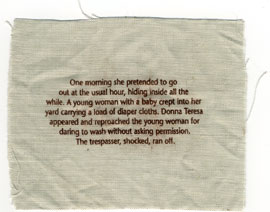 Lorenz has created a hands-on book that takes advantage of the process, the material & the editions. She has taken the story & ingrained every aspect of the story into the book. The pages look like rags, the book is bound in twine, the soap is wrapped in a reproduction of a woman's magazine, October 1956, titled "Mani di Fata" ("Hands of the Fairy") & the box the book comes in mimics an old soap box. Her endeavors creates an unified message.

You can also view Judith Klau's analysis of Soap Story, which features more photos of the book, at the JCBA website:  Soap Story
Posted by VandercookPressPlay at 9:43 AM No comments: 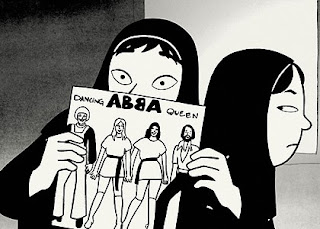 Persepolis tells the story of Marjane "Marji" Satrapi's life in Iran during the war between Iran & Iraq. Through her young eyes, she witnesses the Islamic Revolution & the defeat of the Shah's rule. While the revolution was suppose to bring a new freedom to Iran, the new ruling Islamic fundamentalists become a repressive tyranny. Young Marji refuses to be silent & rebels against her teachers & authority figures, which prompts her parents to send her to Vienna to study & create a better life. However, as a young girl in a new environment with different cultures, the change is trialing & troubling.
The film is based on Satrapi's graphic memoir & Bildungsroman & she was also the co-director. With the original creator being behind the scenes, Persepolis is not only one of the most faithful graphic novel to film adaptations, but in all adaptation history. What the graphic novel did for the medium, Persepolis does the same for animated films. Both medium are thought of as child's play, but both works prove that they can be thoughtful, humorous & enthralling. Satrapi kept the flat black & white style to emphasize that what has happened to Iran could happen anywhere. The people in Persepolis don't look foreigners but like people from some random country.
This review is not without any self-promotion, I must confess. The JCBA is screening the film Tuesday, February 2nd & Wednesday the 3rd, both days at 3pm & 7pm. Admission works on donations only; they are self-determined ticket prices, so offer what you can, in good spirits. However, whether we were screening the film or not, I would still recommend it. Stephen Hunter of the Washington Post writes of the film, "Marjane Satrapi, with co-director Vincent Paronnaud, has taken her work & turned it into a vigorous, revealing & tragic film."
Posted by VandercookPressPlay at 2:39 PM 2 comments:

2010 is over & what a year it has been for the Center. We featured our first annual Letterpress Appreciation Day/ Open House in August. Superstars of the book arts world Daniel Kelm, Marshall Weber & Johanna Drucker all paid us a visit & participated in discussions & lectures. We had two salon concerts, Jane Siberry & Matt Alber, which both sold out. Letterpress printer Amos Paul Kennedy Jr. visited to discuss the exhibit of his work, Proceed & Be Bold, & the documentary of the same name. The Inter-Florida Fluxus tour performed at the Center in honor of the exhibit, the Carbon Alternative. Other exhibits included in 2010 were Wanderlust, the work of John Eric Broaddus & Graphix, the current exhibit here at the library. Arthur Jaffe & Dr. Karen Leader has started a research project on tattoos & the students of FAU who have them, with the end result being a film titled Stories on the Skin. And finally, we've been working hard to raise money for a paper making studio & it seems like the project is underway, with hopes of it being up & running in 2011. So, we've worked hard & we're tired, but we're always happy with the continuing support from our fans & devoted followers. We wouldn't be up & running without you. We're looking forward to another great year! 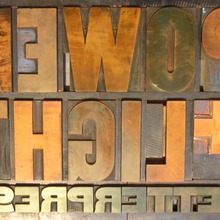 Here at the JCBA, we are supportive of all things book arts, letterpress printing & just about everything in between.  So I come to you today to see if you can help a fellow letterpress printer, Kyle Durrie, to achieve her goal in creating a mobile letterpress studio. With our help, she will be able to buy & make repairs on an old bread truck so that she can move a letterpress around the country to teach workshops, give craft shows, sell prints or teach the average joe about letterpress printing. We are not completely selfless in our inspiration to help out Durrie; if she can get on the road, we would like her to come to the JCBA to teach a workshop & sell prints...all in the parking lot! Every dollar counts, so I ask you to give what you feel for this creative & interesting cause.

Here is a link to her Kickstarter page that includes more details of Durrie's plans.

Happy New Years (And Welcome Back to the Working World) 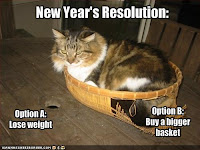 The holiday season is over, the presents are unwrapped & people are still nursing a hangover while they start their resolution to be healthier & renew their gym membership that they may never use. Still, if you're one who suffers from the holiday blues, you'll be happy to get back to the daily melancholy. If you readers want, you can post a comment below on your New Year resolution & ask for tips on how to reach your goal this year, or you can comment on what you would like me to talk about on this blog for 2011.
Also, if you're dragging your feet at work & need a quick pick me up, I recommend checking out the music video for Arcade Fire's "We Used to Wait." If you're not familiar with Arcade Fire, they are a Canadian baroque pop/ art rock group that experiments with different instruments & sounds. Their newest music video is interactive that uses Google Maps & Google Earth. What you have to do is first use Google Chrome for your browser (Google Chrome is pretty state of the art, so ask yourself if you think your computer is up to the challenge) & go to the website, The Wilderness Downtown, where you'll be asked to enter in your address. Trust me, you'll enjoy the experience. Here's an example of what you will see.
Posted by VandercookPressPlay at 11:09 AM 4 comments: